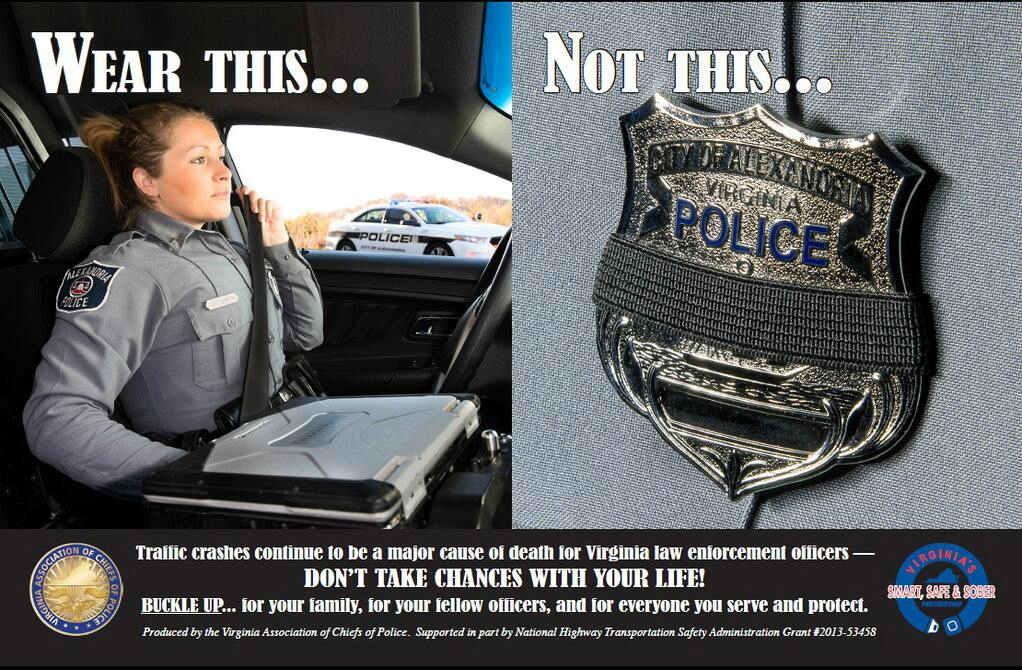 You might assume that police officers are the most diligent seat belt wearers of all.  They are, in a sense, professional drivers.  At times they must drive at high speeds with split-second maneuvers while responding to emergencies or chasing bad guys.  And they are first on the scene of crashes in which occupants are seriously injured or killed because seat belts were not used.

But the flip-side of the law enforcement driving scenario is the constant vigilance for violence, and the fear of getting caught up in the seat belt when fast exiting the car.   The need for quick action by police is not unwarranted but the chances of getting into a collision on the road are most likely much greater than the chances of getting stuck in the seat belt. That black band on the badge represents mourning for fellow officers killed in the line of duty.  As of this posting twenty-five law enforcement officers have been killed in auto accidents in 2013.

So a campaign is underway to educate officers on the safety seat belts provide and I was asked to photograph an Alexandria officer and badge for this poster.

To set this up I started with a police car positioned in the shade of another building so that there would be even light throughout the scene.  The sky was also cloudy at the beginning of the shoot, so that made the lighting even. On the hood, pointed into the driver area, I placed a soft box with Vivitar 285HV  flash on wireless trigger.  I then used a Vivtiar 285HV inside the car pointed at the ceiling.  When I tested that lighting I found more shadows than I liked, so I used a hand held Nikon SB-800 flash just to the right of the camera to fill in.  I liked the scene, but I wanted something a little more bold both to add detail to the shot and also provide additional branding.  So I brought another police car into frame in the background and positioned it so that the agency name could be seen.

I used the Nikon 24-70 F2.8 lens so that I could get a wide angle to include the entire driver area of the car, steering wheel, and the view out the window.  I wanted the officer and uniform, including the shoulder patch, to be in focus so I needed a smaller aperture.  But I also wanted the car in the background to be a bit out of focus so I did not want to stop down too much.  I settled on f 8.0 and that gave me the look I wanted.  It took a few shots to get all the flashes balanced, and the results are above.

The badge was done with light painting- I set up a uniform with the badge and opened the shutter for 15 seconds at f 14.  That gave me enough time to work the LED flashlight all around the badge and avoid any hot spots that a direct flash might have created.  The final result came out super sharp because of the static shot and small aperture.

The poster came out looking very sharp, even when printed at 24" x 36".  It was very nice to see this in print, and it has started circulating on twitter and other sites around the internet.  And the lesson is good for all of us- wear your seat belt!